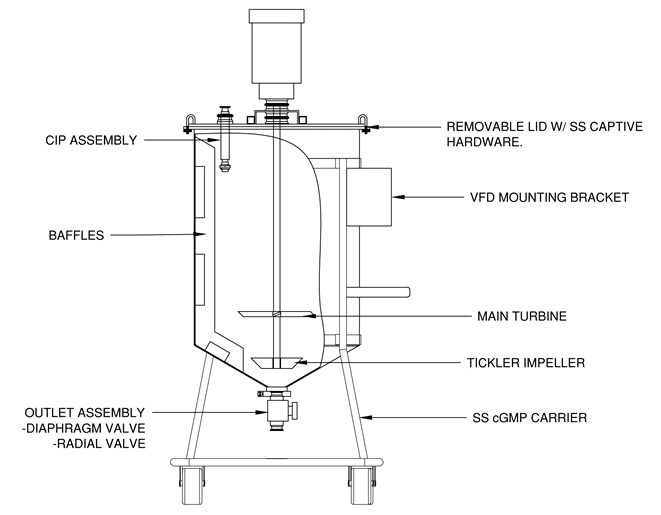 WM Process How To Use, Industrial Use, Pharmaceutical Use, Sanitary Mixers, Stainless Steal Agitator and Tank Options, Top Entry Mixers No Comments

Mixing is the prime activity in processing industries for coalescence of different types of materials. Mixing process dates back from hundreds of centuries, which started from small scale purpose to a large-scale purpose. It is estimated that processing companies suffer huge economic losses due to lack of knowledge about mixing technology (losses accounting to $1-10 billion per annum) as per Handbook of industrial mixing [10]. Thus, it is important to analyze the importance of mixing for the given processes. There are variety of industries where mixing/agitation is required, such as chemical, pharmaceutical, paper & pulp, waste water treatment, food, mineral ore extraction, etc. This particle will focus more on mixing of Cosmetic creams, Syrup preparations & Slurries. It is hoped that this article will give a better idea of details about the mixing of the above processes.

Mixing is a process that involves intermingling products of different chemistries to obtain a definite material. As mentioned by Nienow & Edwards the mixing operation involves both physical and chemical changes, thus it is the most important operation in pharmaceutical, chemical, food industries, etc. Mixing is required for blending, solid-suspension, slurries, heattransfer, dissolving, gas dispersion, emulsification, flocculation, leaching, saponification, fermentation, etc. But the key area of our interest is emulsification, blending and slurry mixing.

All the above processes are completed by a machine called as “Agitator”. It is a machine which allows the mixing of one or more materials in a given environment. Agitator is of various types like Top entry, side entry, bottom entry and potable type. The agitator consists of individual parts/machines like motor, gears, couplings, seal, shaft and set of impellers. Amongst the above, most widely used is Top-Entry, it accounts for the use of majority of applications.

On the other hand, the important physical properties accounting is specific gravity, viscosity, density and many other factors. Other parameters involve speed of the shaft, power required, diameter of impellers/shaft, baffle requirement etc. A detailed discussion on each of these parameters is explained later in this article. The important consideration for the applications mentioned above is the flow, which is axial, so that mixing occurs throughout the vessel and leaving no dead-zones. Also, baffles are provided so that no vortex is created in the circular tank. A detailed elucidation is given in this article on topics like cosmetic creams, syrup preparations and slurry mixing which will give a brief knowledge to users.

Cosmetic creams and other similar products are used for various purposes like moisturizing, cleaning and beautification of body. The raw materials include acids, alkalis, antioxidants, emollients, sunscreen, vitamins, colors, wax, butter, clay, etc. These are mixed uniformly by the process of emulsification. Since the materials used are immiscible it is necessary to keep this material in constant motion (for Eg. In the case of mixture of oil and water). Aggregates and single drops will settle at different rates as per Stoke’s Law, thus, it’s very important to study the rate of flocculation for such processes. The viscosity of such creams is around 250,000 centipoise or more, thus it is necessary to keep such a highly viscous liquid in continuous motion for mixing it thoroughly and uniformly. High shearing is required to mix this type of material. Impellers with high shearing capacity include stator-rotor, saw-tooth cutter, helical ribbon & anchor. Preferable Material of construction include stainless steel grades such as SS304, SS304L, SS316, SS316L, SS904L and equivalent. Since the mixture in the tank contains acids and other reacting materials, the agitator shaft and impellers may be coated with linings of polypropylene, rubber lining, etc. The process may be run in batch or continuous as required. To prevent the dust particles and other contaminants to enter the mixture a seal is provided at the entrance of shaft near the opening of the vessel. The mixing process can achieve maximum efficiency when the agitator is placed vertically i.e. top-entry. The power requirements are larger for such process as it requires heavy mixing due to high density and viscosity of the materials. These applications require high velocity for shearing of the material with impellers like statorrotor & saw-tooth cutter (speed ranging around 750-3000 RPM) and for thorough mixing slow speed impellers like helical ribbon & anchor type are used (speed ranging around 5-25 RPM).

The term syrup refers to a thick, viscous liquid containing almost 85% of sugar and 15% of water or other liquids. They are generally used in pharmaceutical and food industry. The viscosity of the syrup depends on the content of sugar. The more the sugar the more viscous it will be. It is important to know the preparation of syrups for various uses, as said by Sharma [8], it depends on physical and chemical characteristics of the materials used. Various methods for the preparations include the following:

The additional methods involve percolation, addition of medicated liquid used in pharmaceutical industries, preservatives, etc. The mixing of sugar particles is of prime importance depending on its end usage, thus agitation is the only way through which this goal can be achieved. The impellers used for this processes are axial flow turbine & hydrofoil. The viscosity of these syrups are around 2000-3000 centipoise. The suitable speed range for this application is around 100-750 RPM.

In water-treatment plant the industrial waste water is treated by adding chemical reducing agents to make it less harmful and volatile, thus by giving refined water back to the surrounding. The slurry in the water is mixed thoroughly with reducing agents like alum, PAC, etc. and then flocculated, so that all the fine particles are conglomerated and settled at the bottom, which is then removed.

Similarly, in mineral ore extraction, the raw material from the mines are heated and melted in the chamber and then fed into the tanks. With a respective speed the particles/ores are settled down at the bottom of the tank. This is how the ores and other minerals are extracted by the use of mixing through agitators. This a solid-liquid mixing type of process. The speeds used in all of the above process are slow to medium ranging from 1-200 RPM. The operation is performed in batch, continuous and semi-continuous. The viscosity and density of the materials used in this application are comparatively low than the other two processes (viscosities ranging between 5- 100 centipoise & density between 1000 to 1500 kg/m3 ). The power consumption is less for this application also the residence time is small. It has been calculated that, less the residence time less will be the power consumption and less will be the cost of the overall equipment and process. Here, generally high efficiency 3-4 bladed hydrofoil type impellers are used. Also, axial flow turbine, propeller and 2-bladed pitch paddle impellers are used.

Overall from the above applications and their uses in industries, it illustrates that mixing technology plays a key role in pharmaceutical, water-treatment plants, mineral ore extraction, paper-pulp, cosmetic industries, etc. “Agitator” is the device used in mixing of these applications But, more important is to analyze the processes and its parameters required for mixing, so that a required output is achieved. These processes involve complex calculations and other manipulations which a technician cannot perform. Thus, an engineer plays an important role in analyzing these parameters and data who is able to provide an optimized design to avoid economical losses and design failures of these agitators. These factors affect the growth of mixing technology and hence it is always advisable to choose the best solution for your inputs.